Navigating the grief of infant loss

Trigger warning: this story is about infant loss.

When Sky Matheos and Trisdan Roberts lost their twin girls Remi and River at just four days old, the Women’s social worker Karen Fitzpatrick helped them navigate their way through a traumatic time.

Remi and River were born at the Women’s in 2021. They were 23 weeks and five days’ gestation, and weighed just over 500 grams. Sadly, after four days in our Neonatal Intensive Care Unit (NICU), the twins developed an infection and passed away.

“My world at that moment came crashing down,” Sky says.

“My life was never going to be the same, it would always be ‘the before’ and ‘the after’. It was truly traumatic. In that moment, when you’re so distraught, you can’t really focus on what the doctors are saying. I couldn’t compute anything.”

Karen found a private room in the NICU where Sky and Trisdan could be with their daughters for as long as they needed to say goodbye. She organised for Sky’s family to be able to visit and ensured they had privacy. She equipped Sky’s sisters with all the information they needed to organise funerals for Remi and River and offered emotional support as someone Sky and Trisdan could lean on.

“Karen was very compassionate and heartfelt. As well as walking us through all the practical things that need to happen when babies’ pass away, she offered so much emotional support in the days and weeks that followed,” Sky says.

“She guided us through the grief, telling us that what we felt was valid.

“To be a social worker in her position doing that sort of work, you definitely have to be a special soul, and Karen was. I’ll never forget her.”

Karen is a member of the social work team in the Women’s NICU which supports families of babies who are premature, sick or have passed away.

The first thing she does when a family is referred to her care is a psychosocial assessment to understand the family and their background. Then she works with the family to establish what they want and need for themselves and their baby, and helps them to achieve it. This might be helping families to understand medical information, overcome the fear and anxiety that comes with having a baby in the NICU and everything that follows if a baby passes away.

“For parents, we know that something that helps the grieving process is being really well supported during that time after a loss and with all of the decisions that follow, like planning a funeral,” Karen says.

“If we can support and guide them and provide high-quality bereavement care, we know that will help the parents to process the ongoing grief they are going to experience.” 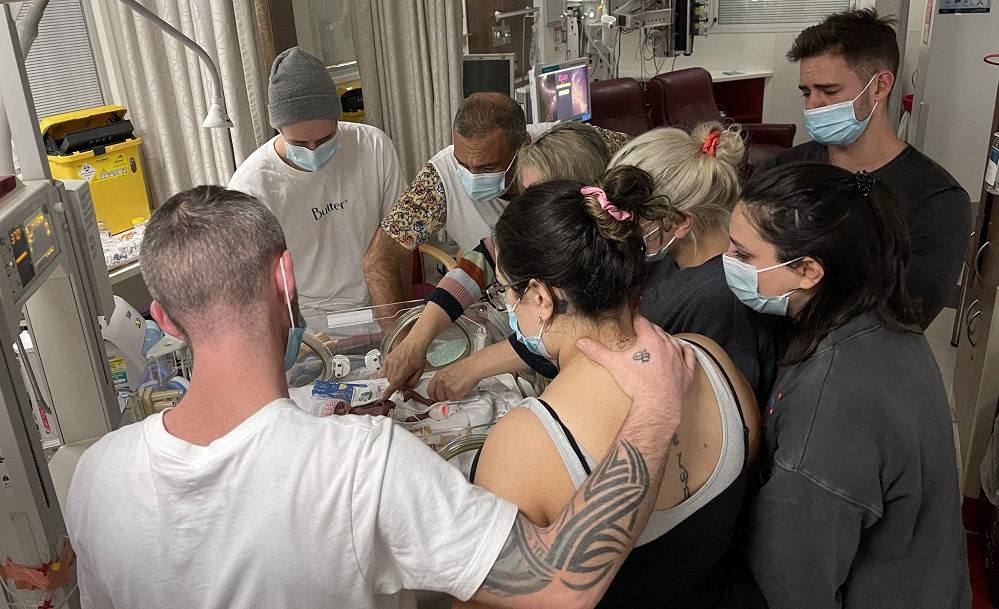 Sky and Trisdan were surrounded by family when they said goodbye to Remi and River.

Karen worked alongside Sky and Trisdan to make the hours after Remi and River died as special as possible. In addition to organising a private room and coordinating visits from family, she helped the parents to understand what had happened to their babies and, at Sky and Trisdan’s request, arranged professional photography.

“Even though it’s not something that anybody expects and is full of sadness and loss, we can make that time after a baby passes away special so that families can leave the hospital knowing they had all of those opportunities to make memories with their babies,” Karen says.

“It’s an honour for us as social workers to be able to sit with families in that space. I’m very privileged that families allow us to be a part of the process of saying goodbye to their babies.”

After the loss of Remi and River, Sky fell pregnant and gave birth to her daughter Rain at the Women’s in February 2022.

For Sky, coming back to the place where she lost her twins was challenging. She reached out to Karen ahead of her first appointment to talk through her concerns and was referred to the social work team attached to the Women’s Maternal Fetal Medicine unit. These social workers continued to support Sky throughout her pregnancy with Rain.

Sky says she wants to share her story because conversations around infant loss are challenging but it’s important families who have experienced a loss know they are not alone.

“I really want to normalise that infant loss happens,” she says. “It can feel very isolating and lonely when this happens to you, but there is support available.”